Scenes allow automated actions to be conditionally processed when status change reports are received from sensors or on a pre-defined timer basis. Scenes can also be triggered manually to provide assistance in complex or multiple step processes e.g. turn on power to the TV, switch the TV on and dim the lights. Scene logic can be "Magic (simple)", "Graphic Block" or "Lua".

Lua as a full programming language enables complex conditional processing based on input from and interrogation of multiple sensors e.g. if first the garden sensor and then within 10 seconds the backdoor sensor are breached someone has just entered the house via the backdoor. This ability provides for better automation, in this example we have both direction (into the house) and we have a sensor double check (in case insects are triggering the garden sensor again!).

A Lua scene identifies to the Fibaro API exactly which triggers should cause it to be run using a %% trigger_name statement and if necessary on the following lines parameters (filters) for the trigger, all within Lua multi-line comments (--[[ and --]]), see the examples below.

Trigger names can be:

Use the buttons to the right for expanded descriptions of these statements.

Note that a scene will be invoked on each occaision that the trigger criteria are met. A wall plug for example may trigger a power dependent scene multiple times as an attached device is switched on and reaches normal operating power usage. You define how many concurrent copies of the scene may run, when this number is exceeded you will receive the too many instances error message. Testing is normally required to ensure that the trigger condition desired is the one being processed e.g.

Will exit a scene if it was entered at some intermediate power usage level during device power up. The scene drops through the condition if it has been triggered for a power above 100W when presumably the attached device has completed power up. The number of times the scene is triggered will be dependent on the number of z-wave reports from the wall-plug and this number can be affected through the advanced wall-plug parameters in the device configuration.

If the above scene were long running e.g. it sleeps for some seconds, then we can check for concurrent trigger processing due to triggers at say 120W and again at 200W as shown in the example to the left.

A scene may be in one of three basic states as detailed by the "run scene" dropdown list on the scene detail panel, "General" tab, these are: 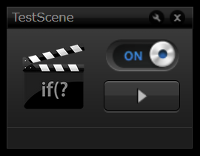 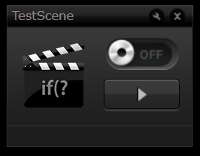 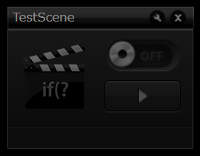 The example below illustrates how commands can be issued at a fixed time of day.

In the following code snippet we test for being triggered due to a power change on the TV wall socket with id 77. In this case we record the actual power consumption in variable tvPower.

Now the more simple case when we only need to know why the scene was invoked. In this case, presumably, we have completed some initialization and will now exit if we were triggered by the home center booting.

Above is the call to scene 71 with a table containing two parameters for use by the scene. Note: the scene id is available on the general tab of the target scene.

The called scene first checks for a passed table and then uses the supplied parameters. Note the two fibaro:debug functions write the exact same message to the log. The string.format() function will be familiar to C programmers (think printf) and this option is less overhead compared to concatenating the variables one at a time.

A list of scenes to be called is held in lua table subScenes. This example allows us to use the ON/OFF slidebar on the scenes panel to decide whether a particular scene should be run. This saves going to the scene detail and changing the "run scene" state to 'Disabled' i.e. we are treating 'TRIGGER_AND_MANUAL' state as enabled and 'MANUAL_ONLY' as a pseudo disabled.

Questions or comments, please e-mail us at info@snys.nl